At the 2011 College of Humanities & Social Sciences Annual Honors Banquet, the World Language & Cultures Department honored three of its esteemed graduates with an "Outstanding Senior Award". 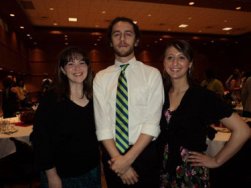 Candice graduated May 2011. Candice plans to teach French in an area High School. We wish her the best of success in her professional career and know that she will go far with whatever path she chooses.

Chad has applied to teach English in Korea in the fall. We wish Chad the best as he moves on to new adventures and the best of success in all his future endeavors and hope that one day our paths will cross again.

Shannon graduated in spring 2009 with a Bachelors degree in Spanish and a Bachelors of Science degree in Radio and Television through both the College of Humanities & Social Sciences and the College of Communications. Shannon was also the 2011 winner of the R. E. Lee Wilson Award, which is the university’s highest honor for a student who best exemplifies qualities of character, determination, involvement, and academic achievement.

Additional Achievements of May 2011 Graduates

Your tax deductible gift, regardless of size, helps the College of Humanities and Social Sciences provide a high quality education to students from the Mid-South and beyond.