Kristen Franyutti was born in Norman, Oklahoma, and received her B.F.A from the University of North Texas in 2011, and received her M.F.A from Michigan State University Summa Cum Laude in 2017. She has lived in Dallas, New York City, and Detroit, and has traveled throughout the world, including, the Middle East, Asia, and Europe. She has exhibited internationally in Canada and Australia. Furthermore, her work has been shown throughout the US, including the A.I.R Gallery in Brooklyn, and the Eli and Edythe Broad Art Museum in Michigan, and has won multiple exhibitions awards. Kristen has been featured in publications including Fiber Art Now. Before coming to Arkansas State, Kristen taught Foundations at Michigan State University. 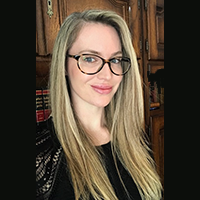